The joy of a male Vizsla is that they absolutely love to work with their human partner
There is much to say, much sorrow. This beautiful boy was born with a spur in his back that cause discomfort-pain all of his life. From the loins forward he was beautiful, his rear, honestly, was a train wreck.

Agility was out due to the spinal spur, but he loved playing Rally with me. The first three titles were a walk in the park, but doing two classes a day became harder and harder. So when he achieved his RAE title we quit competition. Sitting just was asking to much, and there are lots of sits on most courses.

He simply wanted to play and loved life! And we did that- not a highly accomplished show dog, no lots of letters behind his name. We did what he could do. We played at Nosework, actually titled in rally, and played in agility when there was tunnelers. Most of all he went on regular walks, and he protected me with his very loud bark of “my house.”

Four years ago he was diagnosed with a spinal stenosis. Meds worked for a long time, but one night he said he hurt bad. He was always clear about his high pain, his fear of being hurt. When Tega and Kai had a play fest Sunday evening, he started to play, then turned away. Later that  night he snarled at his mother when she wanted to get on the couch with him.

He never understood why things he wanted to do caused pain.

A wonderful friend once said that there are three times to let a dog go:
too late-the dog hurts
too early-only we hurt
on time-rarely happens.

I believe that this is possibly a bit “too early,” but Kaboom will probably not give me a dramatic “NOW,” he has lived with pain and it is a real part of who he is. And, then there is the male Vizsla (and other breeds) temperament of “I will do anything the human asks.”

Kaboom’s sole claim to “fame” is a poster that Eukanuba has hanging over the booth. a HUGE Banner of Kaboom having a blast racing through the water. He paid for the fun for a week, but it is him-running free and loving life!

With the sugar high from the Jelly Bellies (his favorite treat) may you run free, run painless, play with anyone you want with no fear of pain. Find playmates who understand the Vizsla play bark and will give as good as you give!


That is my prayer and wish for you, my very loyal friend. 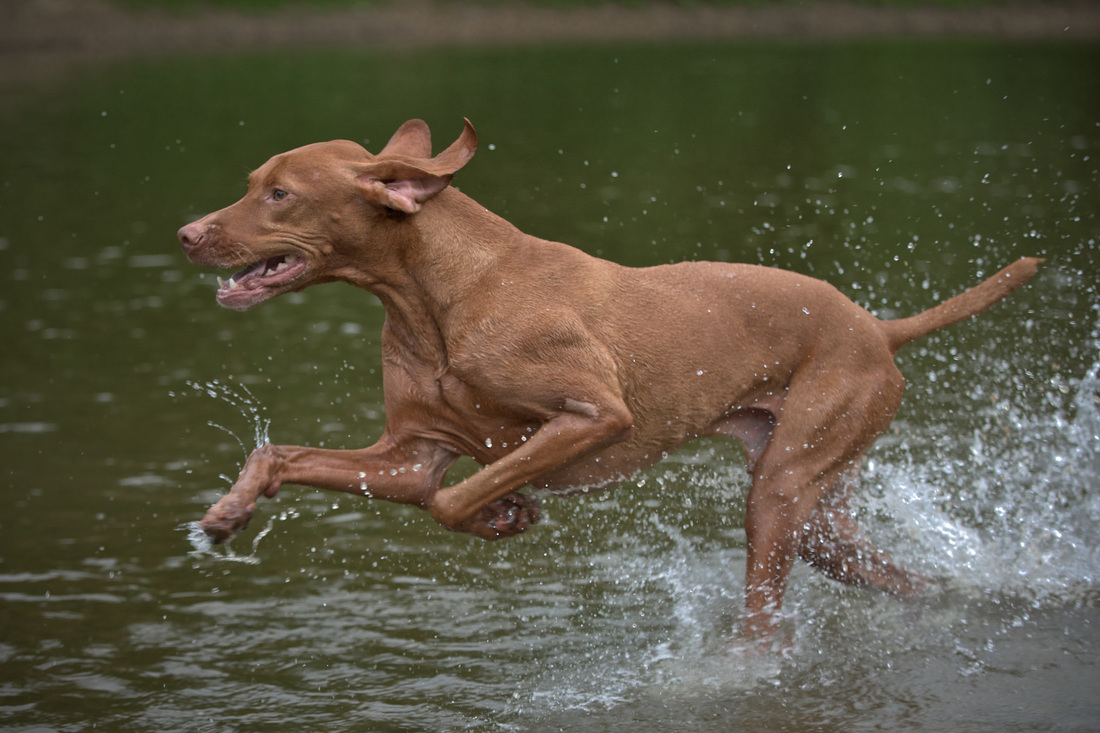 KABOOM! His body was not for the show ring, but his temperament was wonderful, he inherited his mother's love for the woods, for rolling in stinky stuff and play. As a male he had the desire to please. This made him a wonderful dog to train.

He loved agility classes (loves the contacts as they always = treats), but we found when doing his OFA certification that he has a odd vertebrae formation. This ended agility. Weaves and A-Frames would have been painful. KB was a wiling dog-wants to please and I cannot imagine a better team mate.

We have had fun in the Rally ring, and Kaboom has earned the highest Rally title with ease. Now that he has his RAE title, we will not go for repeats, We started playing Canine Nose Work. This is a snap for a Vizsla- they have very intelligent noses.  Our goals were to continue the PLAY.

Recently we went to a fund raiser for a rescue and he got to play TUNNELERS! Nothing but tunnels to race through. It has been 6 years since he saw a tunnel, or took directions from me. He loved it!